The Jaguar in Maya archaeology is associated with kings and with human sacrifice.

Most Maya thrones are upholstered with a feline hide

When you see a throne or seat in a mural or vase painting, often it has feline spots. Of course many of these could have been cotton or bark paper cloth with clever painting. But I bet most royal thrones had actual hides.

The tab marks sticking out at intervals along the edges are there the hides were pegged down for drying. As a hide dries is shrinks, and the part which is pegged is the only part which retains the original length.

When you see a jaguar on a Maya mural, vase, bowl, or plate painting you have to look carefully to see whether it is a trained jaguar or a person in a carefully crafted jaguar suit. If there is a deer and a money dancer in the same row, these are mostly men with animal costumes. But there are many scenes of human decapitation where a feline is carrying a severed head, or is associated with a skeleton deity.

Since jaguars are relatively easy to tame it would be possible to train them also. Dicki Maya had a pet jaguar for years in Guatemala. And you can go onto YouTube and see people with fully mature jaguars playing with them in their living room. So surely a Maya king and high priest could have trained jaguars, both trained to kill (upon command) and trained to be a docile pet (with the ruler and his family).

Identifying feline spots is a challenge

A few polychrome Maya plates of Tikal and Uaxactun show naturalistic aspects of the spots of a jaguar hide. For example, each part of a jaguar body has a different spot pattern. Once you realize this, you can notice which Maya vase paintings are naturalistic, and which are generic.

Most Maya vase, plate, and bowl paintings of feline spots are kind of generalized. And most full-sized felines in scenes simply have round or oval spots; most totally lack the patterns or groupings of spot size and shapes as on a real jaguar. So it is usually not always possible to tell whether the spots on a feline are of a jaguar, a margay, or of an ocelot. Most authors automatically presume any spot is of a jaguar: this is not true. I bet about half the spotted vase, bowl, and plate paintings are misidentified, even in scholarly reports. 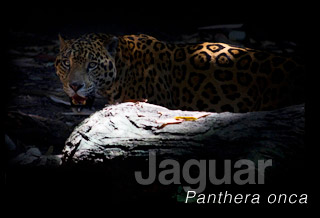 Jaguar Panthera onca
The jaguar is one of America's largest felines. Is has a muscular body, yellowish or reddish brown on the back: the chest, the belly and the inner parts of the limbs are white. The whole body is covered with black spots that form rosettes. These rosettes have spots on the inside. Some individuals are completely black (Fiona 2009).

It has a very large, big and stocky head, with a prominent jaw and short and strong legs. It has five fingers on the front legs and four in the rear legs. It has retractable claws, which are protected by the skin (Aranda 2000).

Habitat of the jaguar
It is distributed from northern Mexico to northern Argentina. There are some isolated individuals in the U.S., though not belonging to a resident population. These individuals seem to come from Mexico (Seymour 1989).

Jaguars inhabit all type of tropical forest, including mangroves and cloud forests; also in arid zones the search for densest parts of the desert scrub and chaparral (Aranda 2000). They inhabit any area that will provide sufficient cover from hunting and a reliable source of water. The jaguar is even common at an altitude of 1200 m to 3200 m (Seymour 1989). The jaguars living at Tikal are at an altitude of about 240 meters.

Ecology of the jaguar
The jaguar is essentially a tropical animal; it has a preference for places near water, with dense forest coverage. Although it has been reported in other types of habitats. It's a lonely hunter; it's a skillful climber and swimmer. The jaguar home range depends on food availability (Fiona 2009; Estrada 2006). There are some jaguars wandering around Parque Nacional Tikal. 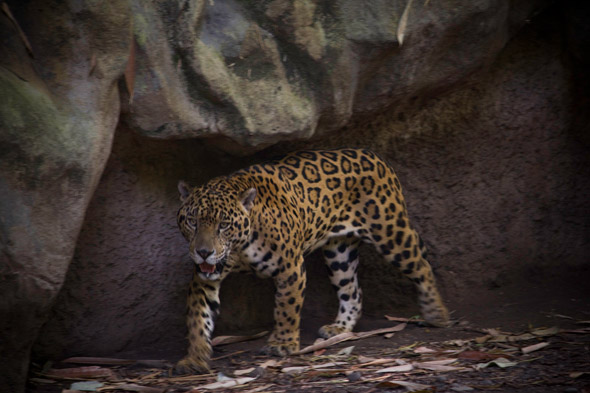 Jaguars are nocturnal creatures so when you see them in a zoo during the day this is because they are in captivity. Full-body view of Panthera onca, photography by Sofía Monzón using a Canon EOS Rebel T2i with a EF-S55-250mm f/4-5.6 IS lens. AutoSafari Chapin, July 2012.

Their burrows can be a natural cave or a hole with dense vegetation. There are more than 85 species that have been reported as the jaguar's prey. Their diet is mainly carnivorous and includes crustaceans, fish, reptiles, birds and mammals, but it can also eat fruits (Seymour 1989). Among the species reported in the jaguar's diet are the peccaries (Tayassu tajacu, T. pecari), capybara (Hydrochoerus), pacas (Agouti paca), the Central American agouti (Dasyprocta punctata), armadillo (Dasypus novemcinctus), caiman (Caiman crododilus) and river turtles (Seymour, 1989). 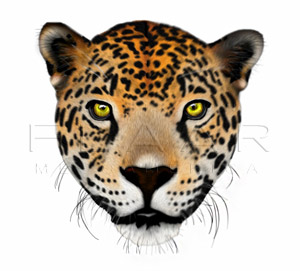 Illustration of the head of a Panthera onca by Diana Sofía Zea. Copyright FLAAR 2012.

A study by Estrada (2006) in the Maya Forest determined that the most hunted species were white-nossed coati (Nassua narica), and the two monkey species (Alouatta palliata and Aloutta pigra). In the Maya Forest, Petén, Guatemala, the most consumed species are mammals, which comprise over 50% of their diet. They also have a selective diet, and tend to prefer to hunt peccary (Tayassu tajacu), white-nosed coati (Nassua narica) and armadillo (Dasypus novemcinctus).

Jaguars are more active at night. According to Estrada (2006) more than 50% of its daily activity is carried out from 19:00 to 2:00 am. The general hunting pattern consists mainly in making extensive walks and ambush, any potential prey. The dense tropical forest allows the prey to hide and not being noticed by these felines. The mechanism the jaguar uses to hunt consists in catching its prey by the back or by the side, directing his attack to the neck of the skull. Taking advantage of its body weight and its jaw it manages to break the spinal cord and sometimes the skull of its prey (Seymour 1989; Emmons 1987).

The Jaguar threats (Protect the jaguar, as it is an endangered species)

The distribution of the jaguar and other felines has been reduced due to hunting pressure and habitat destruction. These factors have caused its elimination in El Salvador, Uruguay and some areas of the Brazil coast (Thornback & Jekins, 1982).

They have a limited range of distribution in Mexico, Guatemala and Argentina (Thornback & Jekins, 1982; Arra, 1974). The biggest population is in the Amazon rainforest of Brazil. However there are several countries where it's an endangered species, such as Bolivia, Costa Rica, Panama, Honduras, Mexico and Guatemala (Thornback y Jekins, 1982).

The main problems of the jaguar are: 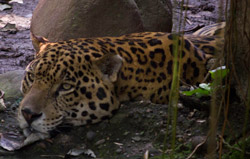 Currently in Mexico and Central America the jaguar occupies about a third of the original distribution. Here the jaguar has been depleted. The only places with good viable populations are Petén (Guatemala) and the adjacent areas of southern Mexico and Western Belize (Hoogesteijn and Mondolfi, 1992). By coincidence, this week (Nov. 28, 2914), a jaguar was photographed strolling across the access road of Parque Nacional Tikal (shown in the Prensa Libre newspaper).

Panthera onca is an endangered species, it now occupies only a third of the original territory. Image by Sofía Monzón using a Canon EOS Rebel T2i with a EF-S55-250mm f/4-5.6 IS lens. AutoSafari Chapin, July 2012.

The jaguar is listed on Appendix I of CITES (The Convention on International Trade in Endangered Species of Wild Fauna and Flora) and is classified as vulnerable by the International Union for Conservation of Nature and Natural Resources (IUCN). In Guatemala the hunting, capture, local trade and wildlife exportation has been declared illegal.

Since there are several isolated habitat patches, the conservation biology theory suggests that there should be corridors between these patches to maintain the level of genetic exchange (Hanski and Ovaskainen, 2000; Mech and Hallett, 2001).

Also anti-fur campaigns and CITES control have shut down international markets that used jaguar fur (Nowell and Jackson 1996). However there is still a high demand for jaguar paws, teeth and other products (IUCN 2012)

Sounds made by a jaguar

Xac xicin, but not listed in Bolles for Yucateco.

Note: Chac is a well known word for red in Yucateco. So Zac bolay would be white feline. 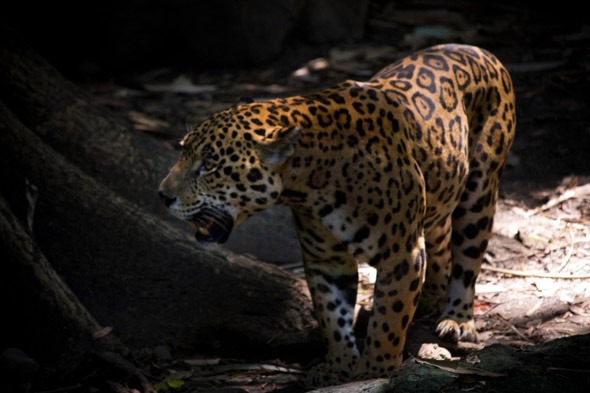 In the Q'eqchi' Mayan language (spoken widely in Guatemala but especially in the Alta Verapaz area), the word balam(te') also means pataxte. There is even a town named Balamte' (pataxte) near Cajabon, Alta Verapaz.

About eight entries I found in the bibliography in an article on pumas in the Maya forests by Christian Giovanii ESTRADA HERNÁNDEZ. But most zoological studies do not cite works on Maya iconography of the felines.

When you Google for jaguar, you tend to get results for the luxury car, jaguar. Considering the size, majesty, and being aware of how well known the jaguar animal is, it is quite a surprise to see how little original factual information is available in the first ten pages of Google returns (after you have skipped references to cars, computers, and music from the jaguar band, as well as learned about Jaguar vodka and other alcoholic drinks with the name jaguar.

http://animaldiversity.ummz.umich.edu/site/resources/Grzimek_mammals/Felidae/Panthera_onca.jpg/view.html
Has one nice painting of a walking jaguar in full profile.

www.bluelion.org/jaguar.htm
Brief info, but what is most helpful are the side-by-side comparisons of jaguar and leopard. The photos, however, are poor; the one of the jaguar body almost unusable.

www.iucnredlist.org/apps/redlist/details/15953/0
Ample text but not many photographs.

www.nsrl.ttu.edu/tmot1/pantonca.htm
Jaguars used to be native to Texas, but rather obviously have been exterminated.