Jaguarundi of Guatemala, Belize, and Mexico, Puma yagouaroundi, is the only feline seldom pictured in art of the Maya.

Our long-range project is to study all significant animals associated with Maya culture. Since there are several hundred species involved, we are studying them by groups or themes. Felines are one major theme since the jaguar was of obvious significant interest to both the Maya, Teotihuacan, and Aztec cultures. 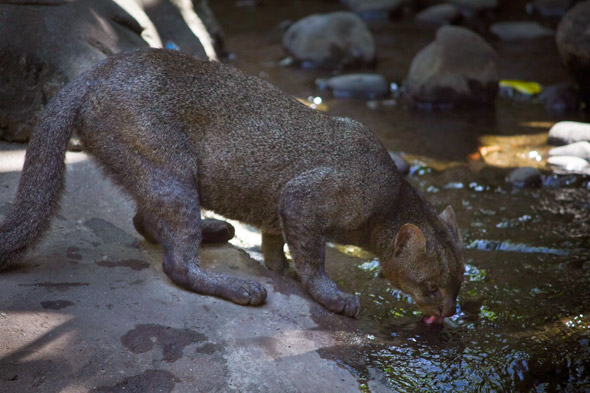 There are two felines in Mesoamerica with no spots

Front view of the head of a Jaguarundi, illustration by Diana Sofía Zea. Copyright FLAAR 2012.

The head of a jaguarundi is very small compared with its stretched body proportions. His head is almost the size of a domestic cat head, but the body is much longer, starting with a long but thick and powerful neck.

Body fur color ranges considerably from golden passing fox color to dark gray to almost black. According to Fiona (2009) the body color could be dark gray, gray, chocolate brown, or sometimes even entirely reddish. However gray individuals are the most frequently reported. They don't have a significant spot pattern on most, but if you look at all the images on Google, you begin to notice definite spot patterns, especially on The Animal Files web site. Indeed that web-site indicates they are spotted as kittens.

This species presents a wide geographic distribution from south Texas (United States), from east to west in the lowlands in Mexico, and southward through the valleys in Peru, southern Brazil, and Paraguay and to the province of Buenos Aires and Rio Black (southern Argentina). It has not been reported at more than 3200 meters over sea level, but Julia (et al 2000) indicates that its range is up to 2000 m. (Clavijo and Ramirez 2009). Its habitat is very similar to the ocelot (Leopardus pardalis), but Jaguarundi is more tolerant to open areas like meadows and pastures (Clavijo and Ramirez 2009). 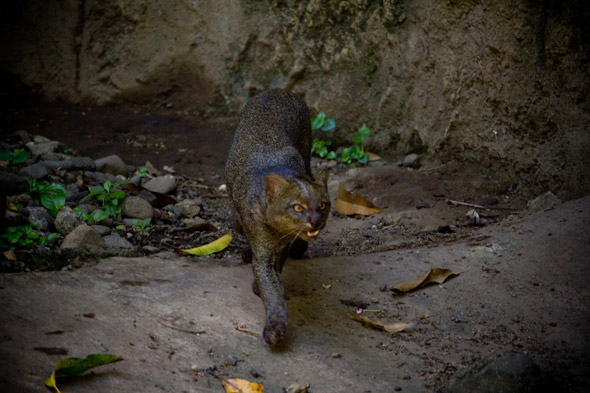 This species is very appreciated because of the preciousness of the skin, which is the main reason why it has been caught. Also it has been losing its natural habitat because of the human pressure. What has caused the isolation of some population, in some cases, even the extinction because of the bottle neck (Clavijo and Ramirez 2009). 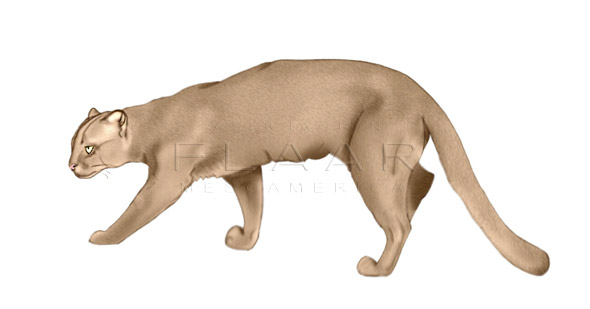 In southern Texas, the Lower Rio Grande Valley has been converted in the last 60 years in agricultural and urban development, leaving only 5% of the original vegetation in this area, which has caused the banishment of this kind in United States, despite the high tolerance to habitat modification. However in some countries is not that persecuted. In Argentina is only persecuted because it hunts only chickens. In countries like Belize, El Salvador, Bolivia, Colombia, Costa Rica, Panama, Mexico, Guatemala, Uruguay and United States, among others the hunting is illegal (Clavijo and Ramirez 2009).

Studies about food habits detected mainly a presence of herbivores and /or seed predators. It also has been detected that they feed on small or medium sized mammals, birds, snakes, lizards, fishes, invertebrates and even eat plants. According to where they live, they have a food preference adapted to that situation. Cabrera and Yeppes (1940) report that for the Central America population there is a preference for primates. Ximenes in 1982 detected that the marmoset (Callithrix jacchus Linnaeus 1758) is ingested by the northeast Brazil population (Tófoli et al 2009). Although it appears to have a long list of food items, these vary among the distribution and the ecosystem structure (Tófoli et al 2009). 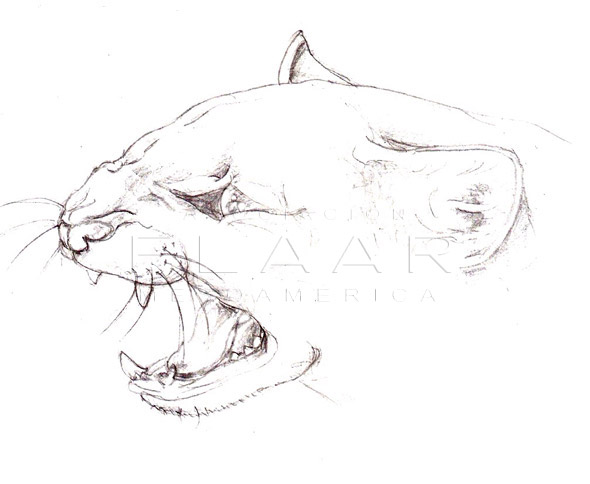 Side view of the head of a Jaguarundi, showing the feline's teeth. Illustration by Diana Sofía Zea. Copyright FLAAR 2012.

Since information of jaguarondi (P. yagouaroundi) is limited, we recommend biologists and archeologists to study this beautiful creature as a theme for your thesis or dissertation.

What is an onza?

Every time I ask about a jaguarundi, someone mentions the mysterious onza. Without getting in to the biology of this question, my guess is that there was, or is, a variant of the cougar or jaguarundi. Not a unique species, but a variant. An example: the black jaguar is not a different species. There is a good bibliography about the onza in Wikipedia. But my experience with the onza is in Mexico, when I ask local people (since my experience is primarily from the field, not just from books or articles).

Comment on the position of the ears in a feline

As with many animals, the position of the ears varies depending on the mood of the animal. Felines, and other animals, place their ears in specific positions as a way of expressing (displaying) their feelings: fear, attack mode, etc.

Puma concolor. Front and side view of the head, showing the ears laid back. Illustration by Diana Sofía Zea, Copyright FLAAR 2012.

The ocelot, Leopardus pardalis, is a smaller feline. Front and side view of the head. Illustration by Diana Sofía Zea, Copyright FLAAR 2012.

Words in most Mayan languages are spelled several different ways. Even the name of the language is spelled differently about every 15 years! One group of scholars has one spelling system; another clique has another spelling agenda. So it helps to have experience with linguistics to understand how many ways one word can be written. An additional issue is that a word such as Kakicoohish is repeated in so many dozens of web sites there is no realistic way to give a citation to where this started.

As with almost everything else on the Internet, most web sites simply copy what they can beg, borrow, or steal from elsewhere (especially photos). A few sites are content farms, which are basically spam sites. We do not list the content farms.

www.ardea.com
Commercial stock photo site but does have over a dozen good photos (used by arkive web site). No text.

ww.arkive.org/jaguarundi/puma-yagouaroundi/image-G43946.html
27 photos. But info is also good, with lots of links (bibliographic style).

www.cathouse-fcc.org/births2006.html
Over 20 photographs of two baby jaguarundis from age 7 weeks up to about a year old.

www.nsrl.ttu.edu/tmot1/feliyago.htm
The Mammals of Texas, online edition. Brief but informative for the dry eco-system of Texas; one photo.

www.tpwd.state.tx.us/publications/pwdpubs/media/pwd_bk_w7000_0013_jaguarundi.pdf Two pages of description (but only of jaguarundi in Texas), bibliography of five items, one photo of one jaguarundi.